Best Gimbals For Sony Alpha A6000

A good thing is that as the A6000 has a relatively small and light camera body, a large number of gimbals are compatible with SonyA6000. Though this is a good thing that there are lots of options to choose from, more options mean the availability of low-quality, overpriced products in the market.

List Of The Best Gimbals For Sony Alpha A6000

Though there are a lot of different gimbals to choose from, here are the 3 we believe to be the best. After presenting them in a list we’ll go over each of them in detail. They are: 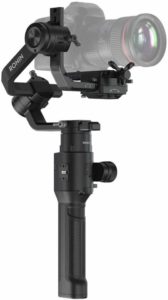 DJI Ronin S is probably one of the best gimbals for Sony Alpha A6000. This gimbal can withstand up to 7.94 pounds of payload. Though it has a battery life of 12 hours, it’s the maximum amount of battery life for the gimbal. On average, you’ll probably get a lifespan of around 8-12 hours.

Its build quality is top-notch. By looking at it, you can tell that it has been put together to ensure working without any kind of problems. Its handles have also been improved compared to some other models of DJI gimbals. You’ll feel more comfortable relative to other gimbals when you hold it in your hand.

The Ronin S includes an excellent controlling system. It’s very easy to use as it allows you to control the main functions of your gimbal without engaging in any sorts of problems. No matter what situation you are in, the Ronin S will provide you with optimal performance. The reason behind that is its ability to easily tweak performance while using it.

The Ronin S offers a smartphone app that’s available for wirelessly controlling the Ronin S. This app is put together magnificently and does a solid job of quickly tweaking the settings on the gimbal.

DJI Ronin S is an excellent gimbal that can improve your overall image quality. It can be a good addition to anyone’s camera accessories. 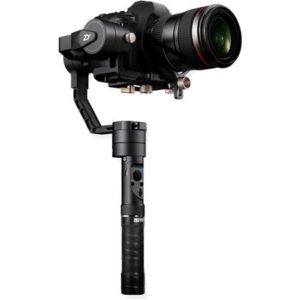 The Zhiyun Crane Plus is another good gimbal for Sony Alpha A6000. It’s a high-quality camera gimbal stabilizer that can weigh up to 2.5kg (5.51 lbs).

By using its motion memory feature, it allows its users to set up advanced camera movements. It can also remember your movements and settings. You can repeat moves with just a simple press of the button. Allowing you to have a camera assistant wherever you go.

Crane plus has a 6th gen Instune Algorithm System that powers its motors. It also has a camera control cable that’s able to sync both of your camera and gimbal operations. Throwing in the availability of its app- ZY Play, crane plus can have advanced shootings such as panoramas and motion timelapse.

Zhiyun Crane Plus has a lot of accessories with it too, from anti-slip sweatband to camera control cables, it has it all. Which ultimately provides a generous experience to its users. 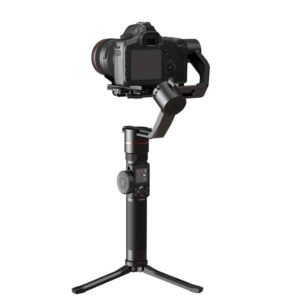 If you’re looking to go out of the common choices regarding gimbals for Sony Alpha A6000, then The FeiyuTech AK2000 is a solid choice. It’s constructed from a light, robust aluminum alloy. It has a pre rubberized grip for getting a smooth grip on the gimbal.

Another impressive feature of the AK2000 is its touch screen. It provides one of the smoothest control feelings available. Its touch screen is easy to use and simple.

It has a joystick that’s usable not only for navigating menus but also the gimbal motors. The magic wheel of AK2000 is quite amazing as it remembers your movements and suggests you what to do next.

Overall, FeiyuTech AK2000 is a great budget gimbal for Sony Alpha AK2000. It’s even perfect for you if you’re a beginner. It has a lot of great features and amazing performance for its price point.

Ronin-S and Zhiyun Crane Plus are two main candidates for the spot of your desired gimbal. But if you’re looking for a casual experience or if you’re not a professional you can choose. FeiyuTech G6 plus.

Top Gimbals for the Huawei P50 and P50 Pro

Best Gimbals for the Oppo X3

Best Gimbals for the Xiaomi 11