Action photography and videography can be a great way to capture a fun adventure.

However, how many times have you seen footage from a wearable camera and found it to be choppy and verging on unwatchable? A gimbal can solve that problem by stabilizing the camera and letting you take professional quality footage.

The Feiyu WG2 PRO Edition is one such gimbal that can help you take your GoPro footage to the next level. What makes this gimbal worth looking at is the wealth of possibilities it offers in terms of stabilization. It offers a full 360 degrees of both rolling and tilting rotation and has four modes.

In this mode, the roll and tilt axes are locked and the camera follows pan movements. This mode will work well when you are mounting the camera and gimbal to the front of a moving vehicle, for example. This will keep the shot steady and focused on the direction the vehicle is facing.

In this mode, all axes are locked and the camera stays pointing in the same position. This mode is nice for when you have the camera and gimbal mounted to a tripod and you want to get some perfectly stable film. This way, the position won’t move even if there are strong winds that otherwise might jostle the position of the camera on the gimbal.

In this mode, the roll axis is locked and the camera will follow pan and tilt. This mode will be ideal for a lot of action videography where you want to capture movement on both the horizontal and vertical planes.

This mode offers something really fantastic that you don’t see with most gimbals. You set a start position and an end position and then the gimbal will move the camera slowly and smoothly from the start point to the end point. This works really well for creating motion time-lapses videos.

Each of these four modes will work with a variety of approaches. The Feiyu WG2 works as a wearable (like on a helmet or chest strap) or as a handheld device. You can also mount it in a variety of ways. There is an included tripod that you can screw in or you can attach other mounts, like suction cup mounts or clamps. The Feiyu WG2 will work with a number of GoPro models as well as similar cameras, including the following:

It should work with other cameras of a similar size that aren’t listed, up to a maximum weight of 130 g.

You don’t need the Feiyu ON app to use the WG2, but it’s a nice feature that lets you control the gimbal from a distance using Bluetooth technology.

The app is available for download from both the Apple App Store and the Google Play Store and it will work with any phone that is Bluetooth compatible. You can also use Bluetooth to control the gimbal via a remote control.

This product hasn’t been available for long on Amazon, so there are only a handful of reviews.

It currently has3.8 out of 5 stars on Amazon (at the time of publishing this review).

The 5-star reviews all talk about how well the gimbal works. One reviewer describes how the WG2 has a “very smooth motor quality with no sound interference on a microphone.”

The two reviewers that aren’t as happy with the WG2 complain that the T-Clamp was missing, something needed to attach it to most GoPro mounts. However, it looks like Feiyu has resolved this issue and they should be included now.

On YouTube, a number of reviewers had high praise for the WG2. YouTube user Air Photography described this as a great option, one he is “really, really happy with” especially because it is waterproof, small in size, and works well.

The YouTube channel Think Media describes the WG2 as the best waterproof gimbal available on the market.

Although the WG2 is generally well received, the Feiyu ON app has not been.

A number of reviewers claim that it eats up a ton of battery life, tends to make the phone crash, and isn’t necessarily all that useful. It does appear that the app isn’t quite yet as good as it could be. It would be nice to have but luckily, the app isn’t vital for using the gimbal. The Feiyu WG2 PRO EDITION is absolutely worth the money for anyone who does a lot of action photography and wants to capture great stabilized footage from a wearable.

It’s particularly a must-buy for those doing action photography in water situations.

This gimbal is fully waterproof (up to one meter under water) so it can handle even really intense water situations.

That means it’s going to be just fine in the rain and snow. You can smoothly capture the action on the slopes when skiing or snowboarding. It is also more than ready to capture water sports like rafting, kayaking, fishing, and even surfing.

The depth rating means it’s not going to be any good to you in diving situations but you don’t really need a gimbal far under water anyway since the water naturally acts as a stabilizer of sorts.

This gimbal is also worth buying because it offers so many different options for how you can use it. It’s great that you can use it as a wearable or handheld but you can also mount it to a tripod or a selfie stick or any of a number of other mounts. It’s nice to have one gimbal that you can use in a variety of different settings and situations rather than needing a few different gimbals. 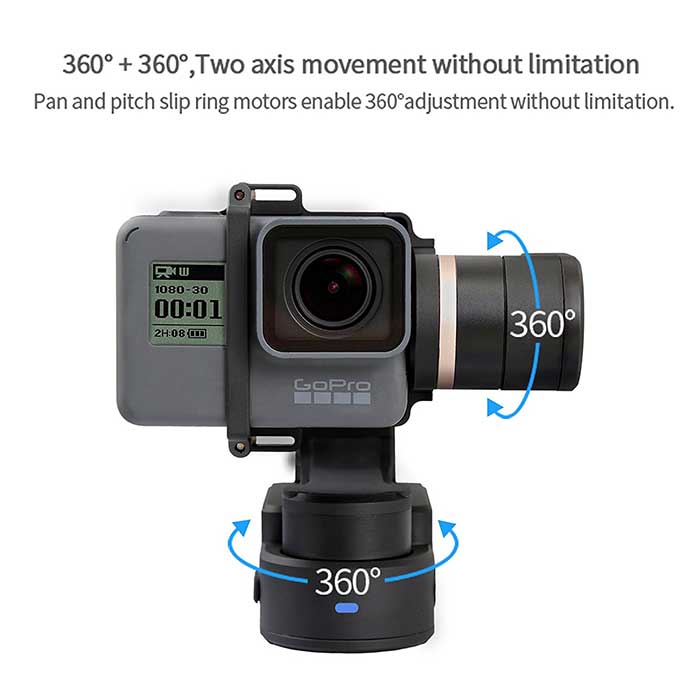 If you want to take stabilized action photography and videography, especially as a wearable, this is the gimbal for you. If you tend to work around water, it’s definitely the best gimbal available for you