Evo RAGE DSLR Gimbal Review – Is It Worth Your Money?

EVO is a name synonymous with quality video stabilizers. They specialize in gimbals, so you know you’re getting a premium product for your video and photography needs.

Before EVO released their Rage DSLR Gimbal series the market was starving for a technologically advanced gimbal to serve all the newly coming thirsty movie enthusiasts’ needs. Gimbals’ motors were getting slower and less precise and the average effective refresh rates of the market were around 2 KHz.

In today’s gimbal market the synonym for good quality video stabilizers is “EVO”.

Since this is their specialty, you can rest assured that you will be getting a premium product for your photography needs.

They stepped up their game by creating the EVO Rage DSLR Gimbal.

It performs like no other gimbal out there with its high torque brushless motors and automotive grade position encoders.

This, in combination with their new CoreMark chipset offers you an unmatched camera stabilization experience with industry’s first 4 KHz effective refresh rate.

These features combined make it perform like no other gimbal on today’s market, making it compete in a league of its own.

Have a look at this sample footage in Tokyo, shot with a Panasonic GH5:

Another new feature is the built-in CCI camera control technology.

This highlight allows you to connect to your wireless camera to the gimbal with a CCI control cable (sold separately.) You’ll be able to monitor the camera shutter, video start, and zoom features conveniently from the handle. Also, there are more features worth mentioning.

Such is having rugged CNC aluminium construction.

The EVO Rage is simply put, built to outlast your DSLR camera.

Furthermore, this gimbal has a wireless feature which allows you to remotely point the gimbal in any direction and/or change stabilization modes on the go via the new EVO Remote App (IOS –Android).

In addition, it comes with an entirely new CCI technology.

This allows you to connect your DSLR camera via a control cable and control it through the EVO RAGE’s buttons instead of touching the camera’s screen or messing with its shutter buttons.

When using your camera for the first time, connect the camera to it and balance it first before turning it on. It’s better for the motors to balance it out beforehand. There are guides and videos available that can help with this. The EVO Rage has four high shooting modes, so you can capture what you need at the right angle: Pan follows, pan lock, pan and pitch follow, and inverted (upside down) modes.
There’s now a new EVO Rage app available on Android and Apple devices that allows you to control the wireless function of the EVO Rage. You can change where the gimbal points and stabilization modes right from your phone!

The gimbal itself is constructed with sturdy CNC aluminum to ISO 9001 standards (the international quality management system that sets high standards for the organization.)

It’s built with such quality, that the EVO Rage should even outlast your camera, especially with the one-year parts and labor warranty included. There is also four (two sets of two) 18650 2000mAH Li-Ion batteries that last for up to six hours with each set of batteries.

Before your first use, you would need to charge them.

It also comes with a battery charger (for two at a time) and USB charging lead. When not in use, the EVO Rage has its handy 11 x 14.5 x 4-inch hard plastic case with padding and specific places for all the parts to safely store the gimbal.

The EVO Rage is suitable for the Sony A7 series and Panasonic Lumix series (both compatible with the CCI technology). It will also be the Canon M and Nikon J series, as well as most mirrorless cameras between 350-1200g.

If you have a larger lens, it comes with a mount to be able to support it.

The EVO Rage will give you enough room for most videographer setups, camera + lense.

At the time of writing this review, the evo rage received 5-star average rating on Amazon and is selling like hot cakes.

There was just 2 reviews though, but after reviewing several EVO gimbals, and talking to their technical support, we are confident that it will remain highly recommended.

Most customer who reviewed evo’s stabilizers have nothing but good opinions on their products, and we also rated their ‘GP Pro’ the best gopro gimbal for good reasons.

Will the EVO Rage DSLR gimbal work on a Nikon D5200?

Yes, it will. The Evo Rage has a payload from 0.35kg to 1.2kg which makes it perfect for almost all of today’s DSLR cameras.

Does the joystick have a depth perception sensor or does it work like an on or off switch when it comes to more precise camera movement?

You do not need to press the joystick down to move any of the motors, simply move the joystick to a direction of your desire and the gimbal will gently follow this direction.

Will this work with my DSLR camera when it’s using battery grip as well?

It will not work with the battery grip attached to the DSLR camera.

Does the rear motor cover up the camera’s display?

On a more skinny one- no, although it could cover part of the display on some bigger ones. Also, the longer your lense is, the further back you will need to scoot your DSLR camera, inching it closer to the rear monitor, thus covering more of the camera’s display.

Everything you could ever possibly want from a DSLR gimbal is here, ready to become a part of your everyday reality. With its different features, convenient use and quality built, you wouldn’t be left wanting more.

The EVO Rage will excel you to the highest tier of dslr videography in no time.

So, are you searching for a cutting edge, state of the art mirrorless or medium sized SLR gimbal that provides you with an unmatched performance?

The EVO Rage DSLR Gimbal is one of the best, most technologically advanced choice for you in the world right now.

So think no further and pick up yours today, we recommend it 100%

Ikan DS2 & DS2-A Gimbal Review: Is It Worth Your Money?

My Top Choice For DSLRs 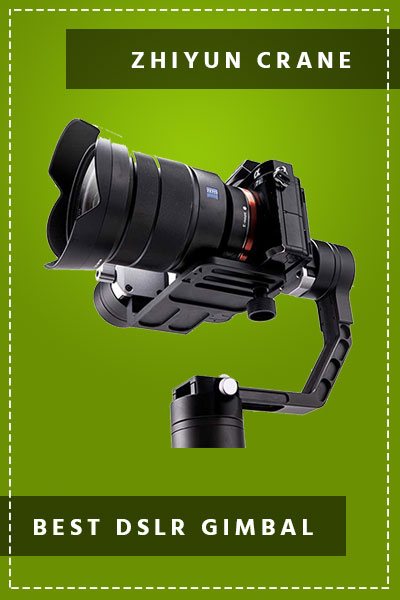 If you would like to Zhiyun Crane before you buy: